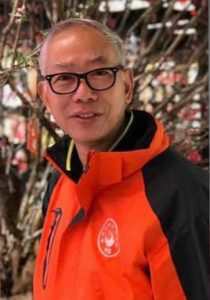 Master Kwan Wing Kwong was born in Hong Kong on 29 April 1955. He is a famous Taiji coach in Hong Kong. Because of his pure and skillful Kungfu, the Hong Kong martial arts community is honored to call him the King of “qinna(catch)”. He is one of the top ten disciples of Master Song Yunhua, the 11th generation descendant of Zhaobao Taijiquan.

Mr. Kwan loved martial arts when he was a child. Since he was 13 years old, he had been asking famous teachers to learn various martial arts styles such as Taiji, South Mantis, Taekwondo, Karate……. Then, he was gradually attracted by Taiji after he was 20. In the late 1980s, Mr. Kwan was very lucky to encounter his Master Song Yunhua in Hong Kong. Master Song is a legendary figure of Zhaobao Taiji and also a reformer in martial arts. The “Taiji Yiquan Dao” that Song constructed was very systematic with both philosophical ideas and sports science. He could skillfully combine the boxing and fighting techniques to show real Taiji Kungfu, but not merely confined to theories on paper.

At this stage, Mr. Kwan was deeply impressed by Master Song, together with his hard work and learnt devotedly. He gradually acquired the recognition of the public and won the reputation of “the King of quinna(catch)”. His Taiji Kungfu has reached the realm of “tough as steel, slippery as fish, sticky as gills, soft as cotton”.

Mr. Kwan has put much effort to promote the Chinese martial arts over the past 20 years. Firstly, he established the Hong Kong Zhaobao Taijiquan Association in 2003 located on the 5th floor of Jade Commercial House, 559-561 Canton Road, Jordan. As the chairman, he shouldered the responsibility of promoting Zhaobao Taijiquan in Hong Kong.

Secondly, He has often been invited to attend and preside over the martial arts competitions and performances, organized by the Leisure and Cultural Services Department and the Hong Kong Chinese Martial Arts Dragon and Lion Association Ltd. He is highly appraised by Hong Kong and overseas.

In addition, Mr. Kwan has also won numerous awards at international levels at home and abroad, including the first International Kung Fu Competition (IMG C) held by North Korea in 2004 and brought glory home by winning the Championship.

He has also served in various competitions as a presiding officer, judge and member of the committee in popularising Chinese martial arts. He is recognized and respected by all walks of life. His Kungfu footprint can be seen almost everywhere. His students not just come from Hong Kong locals, but also from Canada, USA, Britain, France, Germany, Australia and Nepal. These students help to promote Taiji Kungfu overseas.

Last but not the least, in 2009, Master Kwan wrote the book “Zhaobao Taijiquan” which explains profound taijiquan skills in simple language with pictures and reveals Zhaobao’s Taiji forms as well as practical know-how.